The Valley of the Lecrin River (Valle de Lecrin) is a region in the province of Granada in southern Spain along the ancient access route from the Mediterranean Sea to the city of the Alhambra. During the reign of the Muslims, the mountain pass through the Sierra Lujar, which lies between Granada and the Mediterranean Sea, was an important point to control trade.

Since ancient times, the region has always played an important role in the history of Andalusia, as it was the only southern access road to the city of Granada. It is therefore not surprising that for centuries many battles took place here and villages were destroyed over and over again as a result of the wars between different civilizations. The remains of various castles and fortresses from Arab times are the silent witnesses of the violent past of the region.

Orange and lemon trees, vines, fields full of all kinds of crops and orchards with olive and almond trees are part of the evergreen landscape of this fertile valley. This is no wonder, because the snowy mountains of the Sierra Nevada are not far away and due to the melting water in spring and early summer there is an abundance of water for the irrigation of the fields.

In recent decades, the region has become a popular destination among tourists from all over the world. This is no wonder, as the Lecrin valley offers great views of the Sierra Nevada and the Beznar reservoir. Because of the abundance of water and the excellent climate, the flora and fauna of the valley are also very varied, with some subtropical species that are difficult to find in other parts of the world at this altitude.

The Valle de Lecrín is strategically located and is only a short drive away by car for travellers arriving by plane at the airports of Granada, Malaga and Almeria. It is an ideal holiday destination for people who are looking for a relaxing holiday, but it is also very popular with hikers, nature lovers, birdwatchers, cyclists and people who love activities such as climbing, canoeing or horseback riding. Tourists, who want to spend their holidays in the area, can ski in the morning on the slopes of Sierra Nevada and in the afternoon on the beaches of the Mediterranean coast of Granada, the Costa Tropical, sunbathing and bathing.

The eight most important towns in the valley are Albuñuelas, Dúrcal, Padul, El Pinar, El Valle, Lecrín, Nigüelas and Villamena, but there are a total of 17 villages and towns in the region, if we include hamlets such as Restábal, Béznar, Cónchar or Salares.

The village of Dúrcal is built on the steep bank of the river with the same name. It is protected from the cold northern winds by the mountains of the Sierra Nevada, which reaches an altitude of more than 3,000 metres above sea level.

Dúrcal was founded during the Islamic rule of Al-Andalus, the southern part of Spain. After the siege of Granada by the Christian kings, many Islamic families fled overseas to the northern part of Africa or to the more remote areas of the Alpujarras with difficult access for Christian soldiers. Visitors can enjoy the typical way of life of the locals in one of the historic districts of the village, such as La Plaza and La Ermita.

Albuñuelas, a typical white village at the foot of the Sierra de Albuñuelas offers a landscape full of pine and olive trees. Visitors are surprised by the constant murmur of the numerous small streams and springs and the flora and fauna of this natural paradise, including blackbirds, partridges, deer and mountain goats. The narrow, winding streets, picturesque corners and squares remind visitors of the Arab past of the village.

El Padul is located 13 Km. from the capital of the province. The different civilizations that have inhabited the area since pre-historic times have left an important cultural and monumental heritage in the village.

The lagoon of Padul, a protected area for birds, is one of the most interesting natural attractions of Padul. The marsh, one of the most interesting wetlands in southern Europe, is very important from an ecological point of view. It includes the southernmost peat bog in Europe where remains of mammoth and other prehistoric animals have been found. 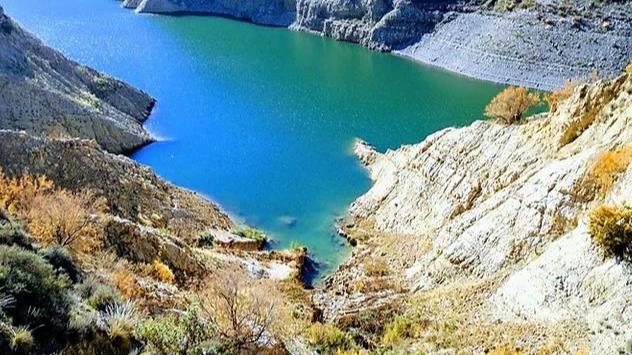 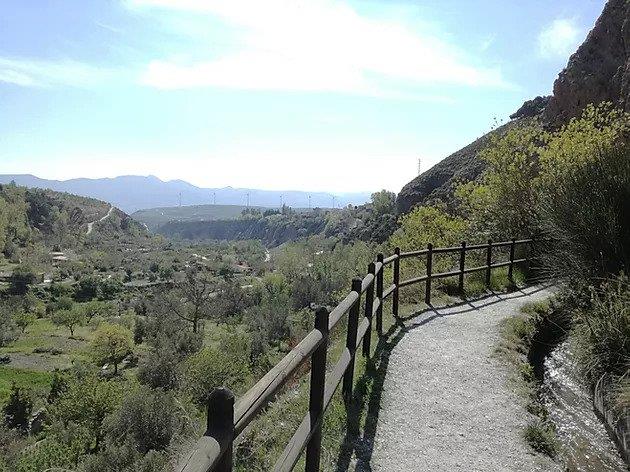 This village also belongs to one of the most beautiful pintoresque villages of the lecrin valley. You will find an old authentic "Almazara" or mill, which dates from the 15th century. Wonderful how it has been preserved! The medieval wooden press, a real piece of engineering work, is still there in all its glory.

Or the Falla de Nigüelas. Here it is possible to see how a fault line (Falla) caused a massive landslide during the Quarternary period. The Falla itself covers 7.6 ha. It forms an important part of the geological evolution of the southeastern Iberian Peninsula. It is particularly interesting because it is relatively recent. These formations are usually not so easy to see, which makes this site an important educational resource for understanding various complex geological phenomena.

Between Durcal, Nigüelas and the neighbouring village of Acequias, you can take an interesting walk that takes you past old mills that used to be used for grinding grain or pressing olives.

Or just a short beautiful walk between the rocks along an irrigation channel that runs all the way from the mountains to the village.

Almost all villages in the valley have different attractions, most of them of Arab origin such as castles or mills. The churches in the villages date back to the period after the reconquest of Al-Andalus by Christian troops, but the narrow streets, the typical courtyards and the architecture remind us of the Arab past.

Visitors can enjoy a variety of activities and the Valle del Lecrín, or the nearby Alpujarras and Sierra Nevada offer some of the best hiking trails in Andalusia. The monumental city of Granada with the world famous Alhambra is only a short drive away.